Why do people think that compromise is the best solution? More often than not, it is the worst solution. Here’s why.

I was sitting in on a mediation hearing last week about how to settle an outstanding invoice with a building owner whose lessee went bankrupt. The details of the case don’t matter to this blog, but what was remarkable was the mediator’s approach to a resolution. He didn’t have authority to rule on the case and he wasn’t a legal expert, so he tried to get both sides to compromise their position. The case is still in process, and there might be a deal that both sides will accept. Any compromise will be a long way from ideal for both sides.

At first glance, a compromise seems to be the best way for differing parties to solve their disputes. The trouble is compromise is a poor substitute for investigation. For example, suppose you visit a bungee jump company. When they get you fitted with the right strength of cords, they weigh you with two scales. What if the first one says you weigh 100 pounds and the second one says you weigh 200 lbs? If the jump company operator compromised, you would have gear for 150 lbs. This will make for either a boring jump or the last thing you ever experience. 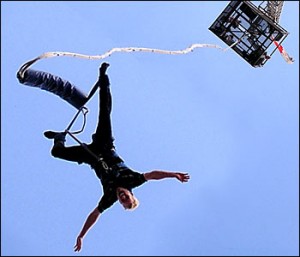 This guy hopes his bungee cord wasn't selected by compromise.

Another problem with compromise is the parties will soon see it for what it is – a game. Instead of coming to a mutual understanding, savvy participants will make their positions as extreme as possible. This will improve their final results while making them look good because they “moved a long way” from their initial position. If you manage your employees this way, you will be nurturing a litigious and combative culture. What’s your alternative?

One of the best features of TOC is how it handles conflict. It states that there are no real conflicts in nature, only mistaken assumptions. If you focus your efforts on testing the assumptions and eliminating the incorrect ones, you will do yourself a great favour. In the bungee example, the operator could use a known weight to test both scales. They would quickly find out which one (or both) was out of calibration. That way they could fit you with the right cords and give you the precise amount of excitement you paid for.

By using this technique to eliminate conflicts, you will promote a knowledge and information-seeking culture. It also promotes cooperation because both parties are working together to test the assumptions. Finally, it discourages gaming the system.

If we were to use this approach to the mediation, one side would emerge the winner and one would be the loser, so this is not for the faint-of-heart. But for managers courageous and thorough enough, it is a superior way to manage conflict.

Next post: John Warrillow – The Glenn Beck of Canadian Business?