Like our readers, we keep our eyes open for business insight on the web. We came across John Warrillow, a writer for the Globe and Mail. He comes with the credentials of a newspaper writer – published author, successful businessman. It’s quite shocking to read his blog. Each post contains a statement that is either obvious or ridiculous. Here is a short sampling of his work.

Golden nugget #1: If you are looking for entrepreneurs, screen out MBAs. Here he states that the best way to hire entrepreneurs is to eliminate MBAs from your hiring pool. He sites a study that concluded that MBAs don’t think like entrepreneurs. That somehow, all of the different programs offered throughout the world produce a bland, unimaginative robot that can only think linearly. If the MBA didn’t see a similar case study in class, he will be helpless. This is like me saying that all dentists make for bad golf buddies or all teachers can’t do their taxes. It’s just crap.

Golden nugget #2: Winners look within for success. Losers look outward for excuses for failure. Well, duh. My high school football coach summed it up in one sentence in 1985 – “Excuses are for losers.” (Thanks Mr. Sekulich!)

Golden nugget #3: Smart people hate it when you ask stupid questions. Here’s another obvious statement. When you have an excellent team, you can’t lead them by always asking leading questions. Even the dullest genius will see that form of treatment as clumsy passive-aggressiveness.

Golden nugget #4: Business plans are a waste of time. Warrillow, in a fine demonstration of tortured logic, describes how he wrote a business plan for a product that nobody wanted and blamed its failure on the time wasted writing the plan. He didn’t test the veracity of his assumptions and found out too late that he didn’t have a viable business plan. He then makes the tremendous leap to say that business planning is a waste of time. 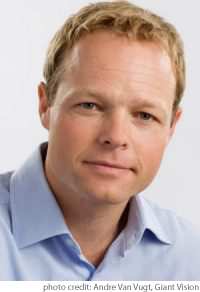 Is John Warrillow our version of....

...this fair and balanced pundit?

Is the Globe using Warrillow’s column to stir up interest like Fox used Glenn Beck’s paranoid rants to stake out new ground on the American political right? It’s either this or they aren’t reading his columns too closely. If their intent is to generate web traffic, it’s probably working. I like reading columns that challenge the status quo, but if you replace conventional wisdom with stupid rules of thumb, have you really added anything to the debate?
Whenever I read something like these blogs, my faith in common sense and logic takes a hit. Thankfully, the comments section is there to restore this faith. An exceptional comment came from the inc.com posting of the business plan blog. Rj, whoever you are, you’re my hero:

“I had no basis for this assumption. I just made it up—which, of course, is the problem with the business plan of most start-ups…”

When Science is a Waste of Time
I believed I could turn water in solid gold by combining it with dirt and cinnamon. I had no basis for this assumption, but I did some experiments and it turned out that it didn’t work. And that’s why scientific experimentation is pointless.
Posted by Rj – 04/14/2011 02:25 pm.