Conan vs Jay – How Not to Plan for Succession

Bill Carter’s book The War for Late Night: When Leno Went Early and Television Went Crazy describes the wild ride NBC took when they tried to change hosts for the Tonight Show. The architect of the change came into it with the best interests of everybody involved, but in the end, everybody took a hit to their reputations and some relationships were destroyed. What happened? Is there any lesson to be learned?
As a long time fan of Conan O’Brien and David Letterman, I followed this with some interest as it unfolded. I thought that Conan got a raw deal from NBC and Jay was a Machiavellian character who didn’t know when to step down. Carter’s book, taken mostly from first-person accounts paints a much different picture.
The issues began in 2004, when NBC executive, Jeff Zucker, realized that he had an embarrassment of riches in late night. Jay Leno was consistently beating Letterman at 11:35 and Conan O’Brien had a fervent following in 12:35 in the all-important 18-49 year old viewer demographic. Zucker knew that Conan’s dream was to host the Tonight Show and wanted the 11:35 time slot. He also knew that Leno lived to work. In fact, in addition to doing five hours per week on TV, he averaged 160 standup dates per year. If he picked one host over the other, he was afraid that the other would go to ABC or Fox, cutting the late night pie three ways instead of two. 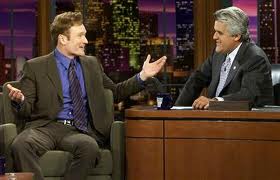 Conan and Jay in happier times.

What Zucker did, at first glance, seemed brilliant. He signed Jay to a 5-year extension with the agreement that it would be Jay’s last contract. He then signed Conan to a 5-year deal at 12:35 while promising him the Tonight Show at the end of the contract. This ensured that both Jay and Conan stayed with the network for five years and set a logical succession plan in place.
The trouble started in 2008, when the deadline began to loom. Leno was still in first place in the ratings and didn’t want to retire. ABC and Fox began some talks with Leno’s reps and it was clear that Jay was not going to retire from TV. Zucker felt an obligation to O’Brien, and he really believed that Conan was the future of the show, so he came up with a solution – move Leno to 10:00 pm and O’Brien to 11:35. The fallout turned into a ratings disaster. Leno was regularly hammered by shows like CSI Miami and O’Brien suffered from lower ratings than Letterman. The local affiliates complained and threatened to pre-empt Leno in favour of syndicated programming.
Enter Jeff Gaspin. As the new head of late night programming, he decided that Leno would move back to 11:35 for a half hour, followed by Conan’s Tonight Show at 12:05. Leno agreed to it but O’Brien balked. After negotiations, Leno returned to the Tonight Show and O’Brien left. Leno’s ratings were lower than before he left but he was able to beat Letterman after a few weeks.
There are no clear-cut good guys or bad guys here. Jay just wanted to write and tell jokes at 11:35. His main fault was he wasn’t honest about his feelings in 2004. He could have left and started another show with a different network. Conan came out of this with the most sympathy, but he is not without blame. While he was crafting his new show, he wanted to make the best show he could. He didn’t take suggestions to widen his appeal. The worse fault was his blind loyalty to NBC over the years. He passed up raises of several million dollars per year because of the NBC promise to be the host of the Tonight Show. This prevented him to see the stark business problem that faced NBC and O’Brien.
Jeff Zucker has taken the most heat for this debacle, and much of it has been unfairly attributed to him. The mistake he made was to try to look too far into the future and make deals that depended on his prediction. When Leno’s contract was up, Zucker could have bought Conan out and extended Leno. Or, he could have let Leno go to another network and compete with him. The moving of Leno to 10:00 was desperate and didn’t work. Now Conan is on TBS and NBC is left without a successor to Jay.
With perfect hindsight, what would be the right move? Zucker’s initial plan for succession was fine, except that Leno didn’t truly embrace the plan. When the deadline became closer, they should have made a decision – Jay or Conan. With the numbers Jay was putting up, it would most likely be Jay. He should have paid Conan’s exit clause and got on with life. Nobody, not even O’Brien himself, would blame the network for such a move. This would have left him without a successor to Jay, but that wasn’t an immediate problem. O’Brien would have been better off from this as well. He could have found the right fit for the type of show he wanted to do. It’s very likely that he would have come back to host the Tonight Show whenever Jay decided to retire or drop dead.
In the end, you can end up doing the wrong thing by trying to do the right thing.

Next post: Air Canada Part 2: Customer Service on $200 Per Year

Previous post: Air Canada – Why do we let our country’s name go on such a poor airline?