Like last week, this week’s blog comes from the world of sports. I grew up in Saskatchewan and got an engineering degree at the University of Saskatchewan. This means that in my spare time, I analyze data surrounding men’s curling results (yeah, yeah, I know). Why would I write about curling in a business blog? One reason is people mess up perfectly good businesses by heeding conventional advice and not checking it’s validity. The second reason is business owners can be lobbied by parties claiming to have their best interests in mind, only to find that these parties have their own agendas.  Alas, Saskatchewan curling is suffering from these two afflictions.  This analysis examines the sad tale of the decline of curling in Saskatchewan.

Curling is Saskatchewan’s provincial sport.  We are proud of our curling heritage and believe we have some of the best players in the world.  Unfortunately, Saskatchewan has not won a Brier since Rick Folk’s rink did it in 1980.  Several changes have been made to the rules of the game and playdown format.  This report explores the effect these changes have on the competitiveness of Saskatchewan Men’s curling. 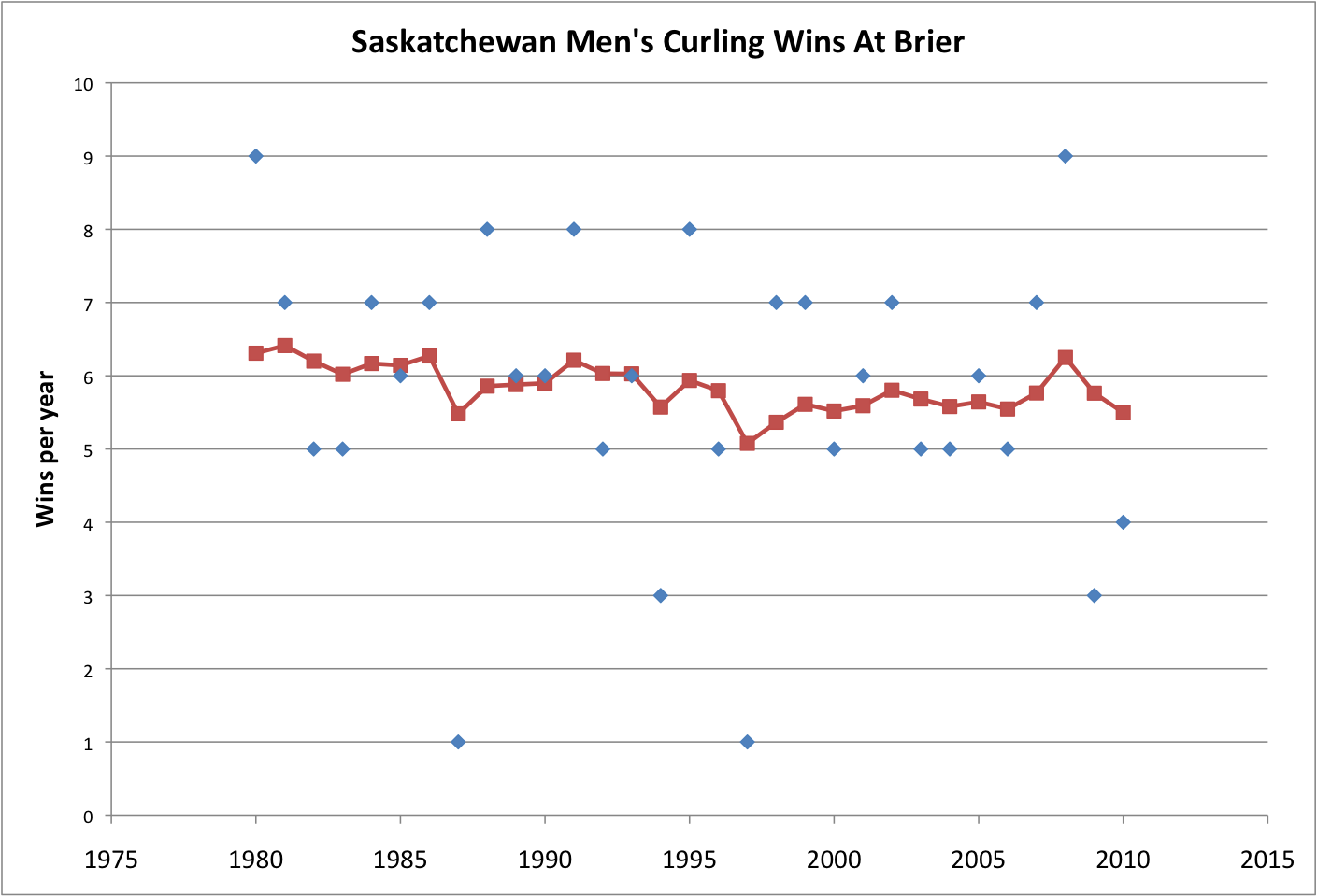 When looking at the number of wins, one might conclude that there is a slow decline in the number of wins with a trend reversal of the last two years of the Pat Simmons team.  When we look at playoff performance, we see how big this decline can be.

Let’s look at the data a little more closely.

The biggest recent change to the rules of curling is the free guard zone rule.  In 1992, Canada used the three-guard zone rule for its playoffs.  In 2004[2], Canada adopted the four-rock rule.  Again, the number of wins changed only slightly, but the appearances in the playoffs went down sharply.

This chart shows that Saskatchewan still has a way to go to shed the reputation of being able to hit but not draw.

In Saskatchewan, teams entering Provincial Men’s Curling Championship all had to qualify the same way.Â  Each team had to qualify at their clubs and then advance to District, Region, North/South and finally the Provincial Tankard.Â  Conventional wisdom stated that this system did not choose the best rep for the Province.  The thinking was because there were so many steps to get to the Tankard, many on poor ice, the best teams had too high a chance of being eliminated by lesser teams.  In 1996, a ninth team was added through a qualifying spiel.  In 2006, the playoffs were expanded to 16 teams, with 6 teams qualifying from the World Curling Tour and Saskatchewan Curling Tour.  With these format changes, one would expect that wins and playoff appearances would increase.  This table shows, that if anything, the performance indicators are going down.

One could argue that Simmons missing the playoffs in 2007 with seven wins is an outlier and shouldn’t be counted.  This would increase the playoffs average to 25%.  In any event, changing the playdown format has not improved performance at the Brier for Saskatchewan.

A sub complaint of the playdown system was Saskatchewan teams were at a disadvantage at the Brier because our teams lack experience compared to other Provinces.  This table shows the number of wins versus the experience of the team, in player-years (1 on this chart refers to three rookies with one player playing in his second Brier).  The outlier of 9 refers to Pat Simmons 4th title in a row.

With the exception of Pat Simmons, the hypothesis that Brier experience is important doesn’t stand up to the scrutiny of more wins or more playoff appearances.

When the SCA implemented the changes in playdown formats, I assume it was for the best of intentions.  It was to improve Saskatchewan’s chances at the Brier by making it easier for top teams to win the Tankard.  The data presented show that these changes have done nothing to improve the likelihood of making the playoffs in the Brier.  In fact, it looks like our chances have decreased since this change took place.  It is not argued here that the change directly hurt Saskatchewan’s record.  Perhaps this improved our teams but other Provinces are improving faster.  For an indication, let’s look at the assumptions around this playdown format:

The current playdown structure is best suited for existing competitive teams.  They will fight to defend this system and even tried to expand it further this year.  They get the benefits of playing in high-profile events instead of qualifying through the playdown structure.  In addition, if they have a bad year on the cash circuit, they can always enter through the playdowns.

The data collected show that although the first two assumptions seem reasonable, they haven’t translated into more Brier wins, playoff appearances or championships.  I wasn’t able to test the third assumption with data.  However, anyone familiar with curling in Saskatchewan knows that over the last 30 years, playdown entries have declined.  This implies that the number of competitive teams has decreased.  In any event, the number of playdown entries has certainly decreased.  This affects the SCA, curling clubs and sponsors adversely.  What if the number of competitors had an effect on the quality of winner? One only needs to look to Canadian short track speed skating to see an example of the power of the number of competitors.  The Canadian short track team has all male members and all but one female member from Quebec.  The most obvious reason for that is the number of skaters there dwarfs all other provinces.  This is the same reason why bigger high schools have better basketball, volleyball and track teams. There are countless other examples of this in action.  Why should Saskatchewan curling be any different?

Based on this research and analysis, I propose the following:

This way we can test the third assumption that the number of competitors has no effect on the quality of winning teams.  The benefits to this system include higher revenues for the SCA and curling clubs, more attractive opportunities for sponsors and an increased number of competitive curlers in the province.  In comparison, what do we have to lose? Will the WCT and SCT not enter playdowns if they can’t qualify through tour points?  If so, that would amount to six entries.

By no means is this a quick fix.  If this works, it will work gradually over several years.

So what does this mean to you or your business? Whenever you implement an important change you must have the courage and discipline to see if the change gave the desired result.  If you don’t, chances are you won’t be raising any championship trophies.  For those that have the insight to scrutinize and challenge conventional wisdom, great success awaits.

Have a great weekend!

A common argument for the current system is today’s elite teams are better than club teams by a wider margin than they were in the past.  As a counter point to that you only need to look to the past in our own province:  Bob Pickering’s[3] team railed off an incredible 123 straight wins on the way to the 1966 provincial tankard.

Next post: A couple networking tips for the day!